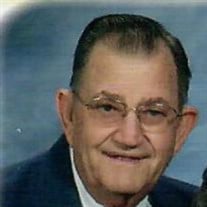 Funeral services for A. Willis Harper, who died Friday, October 23rd in Taylor Regional Hospital, will be held privately Saturday, October 31, 2020 in Cedar Hill Cemetery. Mr. Harper was born in Ambrose, Georgia to the late Aubrey Harper and Alice Paulk Harper and was the widower of Jackie Stokes W. Harper. He graduated from Coffee County High School and completed his undergraduate studies in Education at Georgia Teachers College. He received masters degrees in Education & Counseling from the University of Georgia and in Theology from Southwestern Baptist Theological Seminary. The most important things in his life were: his faith, his family, education, music and sports. He was happiest with his bride of 42 years, Jackie, cheering on the Royals, Georgia Bulldogs, or the Braves. Willis spent his life as an educator and taught in different places, but ended his career here in the Bleckley County School System where he was also a bus driver. He was a member and deacon of First Baptist Church of Cochran where he was a member and teacher in the Prime Timers and Jelks Barrow Sunday School Class, 5-0, Sanctuary Choir, and Singing Seniors. He was also a former Lions Club member and a current Retired Teacher's Association member. Willis also loved traveling, especially for mission work, cooking and baking, gardening, and dancing. He was preceded in death by his brothers, Dave Harper, W. J. Harper, and Bernie Harper, his sister, Louetta Harper Brown, and nephew, Ereatus Brown. Survivors include his son-in-law, Jody Lyles of Cochran, grandchildren, Jay and Kanti Lyles of Austin, Texas, Brett and Angie Lyles of Zachary, Louisiana, and Leigh Anne and Tommy Fisher of Cochran, four great-grandchildren, Maya Lyles, Nikhil Lyles, Cooper Lyles, and Thomas Fisher, brother-in-law, Glenn Stokes, nieces and nephews, Mark Harper, William Harper, Juanita Harper, Bernie Harper, Jr., Faye Prieto, Mary Cannon, and Roger Harper, and many other extended family members that he held dear. Our family would like to thank Beverly, Van, Tanya, Brandy, Deb, and Green Meadows for your friendship and care of Mr. Harper through the years and At Home Senior Living and Staff for such an amazing experience since your doors have opened and he became part of your family. In lieu of flowers, the family asks that donations be made to First Baptist Church of Cochran’s Benevolence Fund or a charity of your choice. Due to COVID19 the family will not be having a visitation, but welcome you to share a memory with them online or with note or card. Fisher Funeral Home has charge of arrangements.

The family of Mr. A. WILLIS HARPER created this Life Tributes page to make it easy to share your memories.

Funeral services for A. Willis Harper, who died Friday, October...

Send flowers to the HARPER family.