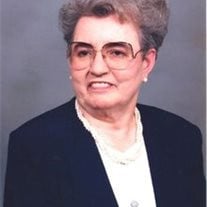 Funeral arrangements for Annette Pritchett Stokes, 88, who passed away on June 26, 2016, will be held Tuesday, June 28, 2016 at 2:00 p.m. in the chapel of Fisher Funeral Home. Burial will be in Cedar Hill Cemetery. Annette was the daughter of the late Robert E. (Bob) and Donie Holland Skipper. She was predeceased by her only sister, Ruby S. Dykes Jones, and only brother, Thomas E. Skipper. Her first husband of over 46 years, J.T. Pritchett, died in March of 1994. She graduated from Cochran High School in 1945, attended Middle Georgia College, taught school for two years, and managed Wynn's 5 & 10 for several years. She worked at the State Bank of Cochran from 1964-1993, retiring when J.T. was terminally ill. She was an Assistant Vice President. Her hobbies were reading, cooking, and gardening. She enjoyed sharing her books, food, and her love with her family and many friends. She loved her work and helping people. She had been a member of Bethany Baptist Church for over 60 years. She is survived by: her husband, Glenn M. Stokes; one son, Larry (Nancy) Pritchett of Rockland. ME; Four Step children, Kathy Glenn, Robert Stokes, and Patty (Steve) Doucet all of Las Vegas, NV and Karen (Tom) Clark of Kingsville, MD; seven wonderful grandchildren; 10 precious great-grandchildren; a very special nephew, Robert Wayne (Linda) Dykes and their family; and several other nieces and nephews. The family will be at the residence on Nicholson-Carr Road and in lieu of flowers donations may be made to Bethany Baptist Church, 608 Hwy. 26 East, Cochran, GA, 31014. The family would like to express their gratitude to Serenity Hospice and Janie Henley for their special care. The family will greet friends immediately following the service in the chapel. Fisher Funeral Home of Cochran has charge of arrangements. www.fishersfuneralhome.net

Funeral arrangements for Annette Pritchett Stokes, 88, who passed away on June 26, 2016, will be held Tuesday, June 28, 2016 at 2:00 p.m. in the chapel of Fisher Funeral Home. Burial will be in Cedar Hill Cemetery. Annette was the daughter... View Obituary & Service Information

The family of Mrs. Annette Pritchett Stokes created this Life Tributes page to make it easy to share your memories.

Send flowers to the Stokes family.