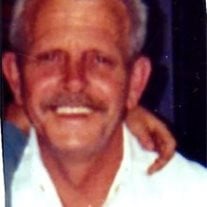 Aubry Cecil Cumbie, Jr. of Cochran, Georgia has ended his journey on August 23, 2017. As he put it, "I've done my time." Cecil was born April 19, 1951, in Pensacola, Florida to his loving parents Aubry C and Dora P. Cumbie. Left to miss him are his only love Pam Hinson Cumbie; his cherished children, Mack (Tino), Pearl, and Cager; his beloved grandbabies, Riley, Ryder, and E.J.; his forever best friends, his brothers, Robert (Zan) and Ronnie (Diane) and his dear sisters, Barbara, Mae, Betty, Linda, and Loretta; his dear sisters and brothers-in-law, Saam, Wendy, and Quinton; and many loved nieces and nephews. Cecil was retired as a flight line supervisor from Robins Air Force Base. Following his family tradition, he joined the US Army and served in the Vietnam Conflict. A hard working family man who never turned down an hour of overtime, when illness forced him to retire, he enjoyed finally having time to work on his house. He delighted in becoming a familiar face at the local hardware stores. He was a humble man with simple pleasures: a hot cup of coffee, playing with his babies, being outside on a sunny day, a good laugh. A night out always meant breakfast at the Huddle House. Cecil lived the ideal qualities of a decent human being: fairness, kindness equality, loyalty, honesty, and generosity. With great pride, his wife of 32 years, Pam has never heard him tell a lie or utter a vulgar phrase. A special thank you to Saam and Mack for leaving no stone unturned while searching for care and comfort for Cecil; And to Quinton, who was always only a call away. Thank you to Serenity Hospice. We are grateful for the TLC. There will be no service and the family requests privacy at this time. They would cherish a note on your thoughts and stories of Cecil to save for the grandkids. These can be sent to: 136 Creekwood Road, Cochran GA 31014. Burial will be private in Milton, Florida. Fisher Funeral Home has charge of arrangements. www.fishersfuneralhome.net

Aubry Cecil Cumbie, Jr. of Cochran, Georgia has ended his journey on August 23, 2017. As he put it, "I've done my time." Cecil was born April 19, 1951, in Pensacola, Florida to his loving parents Aubry C and Dora P. Cumbie. Left to miss him... View Obituary & Service Information

The family of Aubry Cecil Cumbie, Jr. created this Life Tributes page to make it easy to share your memories.

Send flowers to the Cumbie, family.