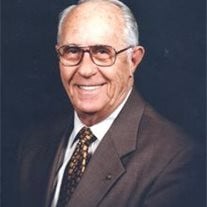 Funeral services for Barney W. Hendricks, Jr. will be held at 11:00 a.m. on Saturday, April 2, in Cochran First United Methodist Church with burial in Cedar Hill Cemetery. Barney Hendricks, 90, died Tuesday, March 29, at the Medical Center of Central Georgia. He was the son of the late Barney W. Hendricks, Sr. and Margaret Cook Hendricks. He was preceded in death by his first wife of 32 years, Dorothy Hitchcock Hendricks. He was a lifelong resident of Cochran. He was a member of the Cochran First United Methodist Church and served in several positions on the Administrative Board. He also has served as a member of the board of the Bleckley County Department of Family and Children Services. He had retired as Director of Personnel and Director of Financial Aid at Middle Georgia College. He was a graduate of Cochran High School, Middle Georgia College, and the University of Georgia where he was a member of the Alpha Tau Omega Fraternity and the Beta Gamma Sigma Honorary Business Fraternity. He was the scoutmaster of Troop 57 of the Boy Scouts of America in the early 1950's and served as chairman of the local Red Cross Chapter from 1956 to 1970. He was elected to be President of The Middle Georgia College Alumni Association on two occasions. He was also chosen as President of the Cochran Rotary Club and was a Paul Harris Fellow. In 1986, he became a member of the Board of Directors of the State Bank of Cochran and served until 1997. During World War II, he enlisted in the Army Air Corps and served in North Africa and is a member of the American Legion having served as Commander of Post 125, Hawkinsville. Survivors include his wife of 30 years, Harriet Thorp Hendricks, daughters, Montie (Larry) Strickland of Newnan and Peggy (Gene) Kelly of Norcross. His grandchildren are Dottie Strickland, Jim Strickland, Margaret Kelly, Alex Kelly, John (Rebekah) Strickland, and Missy (Chris) Hall. He has three great-grandchildren. He will also be missed by Harriet's children, Betsy Swift, Christy and Andy LeHeup, and Margaret and Tom McKenna all of Columbia, S.C. and their loving children and grandchildren. The family will receive friends from 6 to 8 pm Friday, April 1, at Fisher Funeral Home. The service will be Saturday, April 2, at 11:00 a.m. at The First United Methodist Church in Cochran. In lieu of flowers, the family requests donations to The First United Methodist Church of Cochran, 119 East Dykes St. Cochran, Georgia 31014 or a charity of your choice. Fisher Funeral Home has charge of arrangements.

The family of Barney W. Hendricks, Jr. created this Life Tributes page to make it easy to share your memories.

Funeral services for Barney W. Hendricks, Jr. will be held at...

Send flowers to the Hendricks, family.