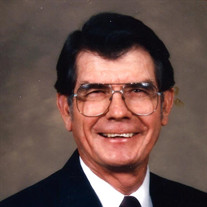 “As for me and my house, we will serve the Lord” Joshua 24:15 This is how Reverend Buford Raffield lived his life. Serving the Lord. Born on December 5, 1927, Thomas Buford Raffield went to be with the Lord on Tuesday November 20, 2018. Reverend Raffield made it his purpose to live his life for the Lord. He began preaching at the age of Seventeen. On August 30, 1953, he married his love, Marjorie Davis, and together the two of them began ministering to those around them. Reverend Raffield was a graduate Dudley High School, Mercer University and Southeastern Seminary in Wake Forest, North Carolina. While attending Seminary he pastored Sharon and Damascus Baptist Churches in Appling Georgia. Upon graduation from Seminary he pastored Maple Springs Baptist Church, Maple Springs North Carolina. His ministry touched numerous lives as he served around Georgia in various churches such as Dexter Baptist in Dexter, Mt. Calvary Baptist in Cary, Roddy Baptist Church and Empire Baptist Church in Cochran Georgia. Reverend Raffield is preceded in death by his parents Shafter and Annie Belle Raffield, a sister Louise Raffield McHardy, and a brother George Raffield. Reverend Raffield is survived by his sister Winnie Raffield Bunn and his bride of sixty-seven years Marjorie Davis Raffield. He has two daughters Susan Elaine Raffield Manning (Steve Manning), Patricia Claire Raffield Saber (Aziz Saber), and a son Steven Grant Raffield (Robin Faulk). He has four grandchildren Matthew Manning, Meredith Manning Lawhorn (Jamie Lawhorn), Victor Saber, Mitchell Raffield, and a great grandson James Buford Lawhorn. The services are planned for Friday, November 23, Mount Calvary Baptist Church, Cary, Ga. at 2:00 PM. Visitation to follow the service. Private burial. In Lieu of flowers, the family requests that contributions be made to Mt. Calvary Church Ministry and Missions Fund, 134 Abney Rd. Cochran, GA 31014.

&#8220;As for me and my house, we will serve the Lord&#8221; Joshua 24:15 This is how Reverend Buford Raffield lived his life. Serving the Lord. Born on December 5, 1927, Thomas Buford Raffield went to be with the Lord on Tuesday November 20,... View Obituary & Service Information

The family of Rev. Buford T. Raffield created this Life Tributes page to make it easy to share your memories.