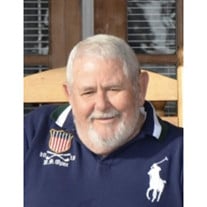 Cochran - Clemey James Johnson, Jr. "Jim" to most, passed away Wednesday, September 1, 2021, at Regency Hospital in Macon.. Memorial services on January 7, 2022 at 11:00 A.M. in St. Mark Catholic Church in Eastman, GA. Jim was born on September 13, 1936, in Dothan, AL to Clemey James Johnson Sr. and Minnie Merle Andrews. He was a veteran of the United States Navy, a long-time employee of Lockheed Martin Corporation as the Technical Representative for the C-5 Galaxy Aircraft, and Systems Engineer with Intergraph. He lived in Marietta, as well as a large part of his life in Angeles City, Philippines. He also served as an Air Force civilian supporting the C-5 program in Hickam AFB, Hawaii and Kadena AB, Okinawa, Japan, Kelly AFB in San Antonio, TX before settling down in Cochran, Georgia. He is survived by his wife Evelyn Johnson of Cochran, GA; daughters Vicki Hand and Deborah Lowe, grandson Corbin Lowe, all of Jacksonville, FL, Michelle Johnson of Beaufort, SC, Cheryl Merle Johnson of Montreal, Canada, and son Cesar Johnson of Evans, GA along with his grandchildren: Enzo and Melanie.

The family of Clemey James "Jim" Johnson Jr. created this Life Tributes page to make it easy to share your memories.

Cochran - Clemey James Johnson, Jr. &quot;Jim&quot; to most, passed away...