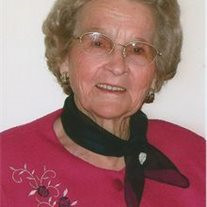 Funeral services for Mrs. Florence Reffuse Davis, 96, of Cochran, who died December 28, 2015 at Bleckley Memorial Hospital, will be held Thursday, December 31, 2015, at 2:00 p.m., in Little Bethel Freewill Baptist Church. Burial will be in Little Bethel Cemetery. Born in Laurens County, she was daughter of late Jim T. and Viola Collins Reffuse and the widow of Johnnie Wilburn Davis. She had lived in Bleckley County most of her life and was a homemaker. She was a member of Little Bethel Freewill Baptist Church where she was a Sunday school teacher, church secretary and treasurer, Little Bethel Sunshine Club. She was also an active at the Bleckley County Senior Citizens Center. She was preceded in death by a grandson, Todd Wynne and 2 son-in-laws, Buddy Brown and Duke Mullis. Survivors are: 2 sons, Donald (Sue) Davis of San Antonio, TX and J. Hughlon (Shirley) Davis of Cochran; 5 daughters, Wynelle (Edison) Smith of Eastman, Virginia Mullis of Panama City Beach, FL, Ivalene (Herman) Wynne of Cochran, Linda (David) Roland of Auburn, AL, and Renee (Wayne) Tripp of Cochran; 15 Grandchildren; 19 Great-Grandchildren; and 7 Great-Great-Grandchildren. Family will be at the residence of Mr. and Mrs. Herman Wynne, East Lakeshore Drive, Cochran, and will greet friends after the services at the church. Fisher Funeral Home is in charge of arrangements www.fishersfuneralhome.net

The family of Florence R. Davis created this Life Tributes page to make it easy to share your memories.

Send flowers to the Davis family.