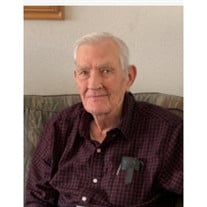 Funeral services for Glenn M. Stokes, who died August 10 2021 at his residence, will be held Sunday, August 15, 2021 at 2 pm in Bethany Baptist Church in Cochran. Glenn was born on September 18, 1928 in Cochran, Bleckley County, the son of the late Annie Randitt Stokes, and James M. Stokes. He was a graduate of Cochran High School, class of '45 and Middle Georgia College. He was a member of Bethany Baptist Church for over 70 Years and was preceded in death by a sister Jackie Stokes Wimberly Harper and a brother Thomas Donald Stokes . Glenn began Naval pre-flight school in 1947, and was designated a naval aviator in November, 1949. He was assigned to his first operational squadron, flying land based patrol planes, locating, tracking, and being prepared to sink unfriendly submarines. In the early 50's, he became a primary flight instructor, teaching first flight through solo, including precision landings and flight maneuvers (acrobatics). Lieutenant Commander Stokes then completed helicopter training, specializing in helicopter anti-submarine techniques, while a member of NAS Key West squadron. While on a carrier out of Norfolk, VA, he made his first life-saving rescue by helicopter. Glenn spent the major part of his remaining time in service, supervising and training Reserve pilots and air crew, in both helicopters and fixed wing aircraft. He was at NAS Twin Cities (Minneapolis, MN) during the 1964 flooding of the Mississippi River, and performed numerous helicopter search and rescue missions. LCDR. Stokes retired from service in 1969. LCDR. Stokes was predeceased by his first wife Mary L Sternowski Stokes in 1986. He married his second wife, R. Annette Skipper Pritchett Stokes in 1995, whom he had known since the second grade. She passed away in 2016. He is survived by daughter Kathleen Glenn; daughter Karen Clark, husband Tom, grandson Glenn, wife Margaret, great-grandsons Graham and Samuel, granddaughter Laura and fiancee, Joseph Pollock; daughter Patricia, husband Stephen, granddaughter Tammy, husband J. Lee Evans, great-grandsons J. Joshua, Patrick, Gareth, and Richard; grandson Jefferey; grandson Kevin and fiancee Kathryn Hernandez, great-granddaughters Allyson and Jillian, great-grandson Kelton; granddaughter Brittany, great-granddaughter Danica, great-grandson Nathan; granddaughter Susan; and son Robert. His family attest that he was always a loving, attentive father, grandfather, and great-grandfather. They loved hearing him tell stories of his childhood, especially growing up on a farm in Cochran, his Navy years, and all of the many stories he could tell about each of them. Everyone enjoyed rides on his 1949 International Harvester tractor, and taking trips to locations around the USA. In lieu of flowers, donations in his memory, may be made to Bethany Baptist Church 608 Hwy 26 E. Cochran, Ga. 31014 or Georgia Sheriffs' Youth Homes Foundation, Inc. 3000 Hwy 42 N. McDonough, Ga. 30253 .

Funeral services for Glenn M. Stokes, who died August 10 2021 at his residence, will be held Sunday, August 15, 2021 at 2 pm in Bethany Baptist Church in Cochran. Glenn was born on September 18, 1928 in Cochran, Bleckley County, the son of the... View Obituary & Service Information

The family of Glenn M. Stokes created this Life Tributes page to make it easy to share your memories.

Send flowers to the Stokes family.