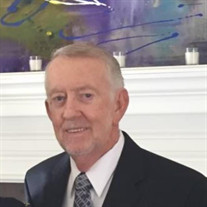 Gus A. “Sonny “ Giddens passed away on January 12, 2022. He was 78. A memorial visitation will be held Saturday, April 2, 2022, at 10:30 A.M. in the chapel of Fisher Funeral Home. Sonny was born at a home near Gum Swamp that did not have electricity on February 4, 1943 to Gus A. Giddens, Sr and Mattie Horton Giddens. He often recalled when the family did get electricity and a radio to listen to in the evenings. The family moved to town in 1949 when his father was elected sheriff. At that time the sheriff’s family lived in a home attached to the county jail, so Sonny grew up entertaining and being entertained by the prisoners. Sonny graduated from Cochran High School in 1961 and briefly attended Middle Georgia College, but he was distracted by the local pool hall and his mother’s death in 1962. He then worked as a deputy sheriff. In 1964 he married Connie Robertson. They had a son, Aric, in 1965. He went to work at the Huber Corporation, but in 1972 he decided that he wanted to be his own boss. He and Connie bought the Holland House Restaurant which they owned and operated for 27 years. There he found his calling, running a business, cooking great food, and being active in community affairs. He was particular proud that he provided employment to so many young people. Working at the Holland House was the first job for many young women in Cochran, and he and Connie took pride in that and followed the lives of and remained close to many of those women as they went on to further their educations and have families. In 1999, he and Connie moved to Memphis after selling the Holland House to be close to their son and 3 small grandchildren. In Memphis Sonny worked in the business office of Sam’s Club and was a very active grandfather, picking up kids from school, helping with homework, and attending numerous sporting events. In 2015, with their grandchildren almost grown, he and Connie moved to Hot Springs, Arkansas. There he enjoyed living on the lake, fishing from his dock, and taking the family out for boat rides. Sonny loved college sports, dogs, and his many friends and family. He could be a bit of a pessimist, and often lamented that he didn’t think he would live to see the Georgia Bulldogs win another National Championship. He was so excited when he watched the Bulldogs win on January 10, 2022 that he watched the game twice more the next day. Sonny is survived by his wife of 57 years, Connie, of Hot Springs. His son Aric and daughter-in law Andrea live in Memphis, TN. His three grandchildren are Dylan Giddens, Mary Hannah Giddens, and Isabella Giddens. He was also close to his extended family through his daughter-in-law - Mary Jean Cunningham, Greg and Deanna Bunn, and Richard and Samantha Shewmaker. Special friends include Tammy and Tate Parker. All who knew him will miss his wit, wisdom, cooking, and strong work ethic. His family ask that in lieu of flowers, that you consider a donation to a local animal shelter or the Salvation Army.

The family of Mr. Gus Sonny Giddens Jr. created this Life Tributes page to make it easy to share your memories.

Send flowers to the Giddens family.