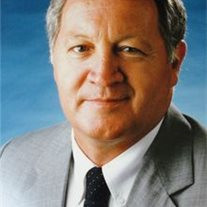 SAPP, H. Wyndell (72) (August 24, 1942 – November 10, 2014). "And if I go and prepare a place for you, I will come again, and receive you unto myself; that where I am, there ye may be also." John 14:3. After a courageous twenty year battle with Parkinson's Disease, Wyndell has gone home to be with our Lord. He was born in Cochran, Georgia and is the son of the late Horace and Ivolene Sapp. He graduated from the University of Georgia in 1964 with a Bachelor of Science degree in Forestry. An avid Bulldog fan, he was a lifetime member of the Georgia Bulldog Club as well as the Jayhole Club. Working for the same company his entire thirty-two year career, Wyndell retired from Champion International Corporation--previously St. Regis Paper Company--as Vice President Southern Forestry Resources, Forest Products. During this time he was honored for his influence on the Forest Products Leadership Team. He served as President of the Florida Forestry Association and was an active member of the Chamber of Commerce in both Pensacola and Jacksonville, Florida and Bangor, Maine. Wyndell was married to the love of his life, Shirley, for 49 years and they, along with their two daughters, shared a wonderful life together. A true family man of God, he always put his wife and daughters first, second only to his Lord and Savior. Wyndell, when asked, would always tell you he was terrific--regardless of his circumstances. He simply loved life. In his early years he was an avid golfer and hunter. Later when he retired, he spent endless hours fishing on the lake and spending time with his grandchildren, who were his pride and joy. He is survived by: his soulmate Shirley T. Sapp of Seneca, SC; two daughters: Wendi Arthur and husband, Mike, of Ponte Vedra, Florida; Suzanne Burgess of Indian Trail, NC and Bo Burgess of Apalachicola, Florida; three grandchildren: Anni Burgess, Benjamin Arthur and Mackenzie Arthur; siblings: Doyle Sapp and wife Jo; Rose Abbott and husband Roy; Diane Sullins (late husband Ernie); sister-in-law Faye Barlow and husband Billy; and his cherished uncle, aunts, nieces and nephews. The homecoming celebration for Wyndell's life will be Saturday, November 15 at 3:00 p.m. at Mt. Calvary Baptist Church, Cochran, Georgia. The Sapp family will receive family and friends at 2:00 p.m. prior to the church service in the sanctuary. After the church service family and friends are invited to join the family in the fellowship hall of Mt. Calvary Baptist Church. The end of our twenty year journey was joined hand in hand with Hospice. With their care, it was possible for Wyndell to remain at home. Their love and support was beyond belief and our family will be forever grateful. In lieu of flowers, contributions can be made to GHS Hospice of the Foothills, 390 Keowee School Road, Seneca, SC 29672.

The family of H. Wyndell Sapp created this Life Tributes page to make it easy to share your memories.

Send flowers to the Sapp family.