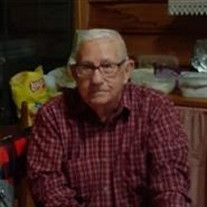 Cochran – Henry Fred Berryhill, Sr., age 89, died Thursday, February 17, 2022, in the Bleckley Memorial Hospital in Cochran. Graveside funeral services will be held Friday, February 18, 2022, at 3:00 P.M. in Bowers Cemetery in Empire. The Rev. Rich Hulsey will officiate. The family will meet friends following the service at the cemetery. Fred was born in Cochran and lived in Cochran his entire life. He was the son of the late Gentie Clyde Berryhill, Sr. and Patsy Bollinger Berryhill. He attended Cochran School's and was a Veteran of the Korean War. He retired from Warner Robins Air-Force Base and the Army National Guard Detachment 1, Company C, 1st Battalion of the 121st Infantry division. Fred was of the Baptist Faith and was a member of The Tuesday Pool Shooters Club and GRIT Marble Club. He was preceded in death by a sister, Rosa Williams Stancil and brother, John "Skeebo" Berryhill. He met Mary Bowman in Cochran at a peanut boil and they were married May 15, 1953. They were married 68 years and raised three children: sons, Henry Fred Berryhill, Jr. “Freddy” and his wife Agnes, Henry Franklin Berryhill “Franky” and his wife Stephanie both of Cochran, daughter, Janet Scott and her husband Steve of Bonaire; 5 grandchildren, Trey Berryhill and his wife Megan, Ashley Floyd and her husband Michael Ray, Stephanie Wright and her husband Nick, Shannon Berryhill, and Matt Thomas and his wife Britney; 8 great-grandchildren, Christine Berryhill, Lily Berryhill, Henry Berryhill Floyd, Sadie Floyd, Maverick Floyd, Josie Claire Thomas, Corbin Thomas, and Weston Thomas. Fred is also survived by brothers, Clyde "Sonny" Berryhill, Jr., Wyndell Berryhill both of Cochran, and Bill Berryhill and his wife Ann of Lizella; many nieces, nephews, and cousins. The Family is at the Berryhill residence on Williams Road in Cochran.

The family of Henry Fred Berryhill Sr. created this Life Tributes page to make it easy to share your memories.

Send flowers to the Berryhill family.