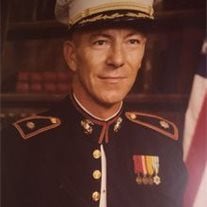 Funeral services for Major Herman Edward Belflower USMC, Ret, 77, who died in his hometown of Cochran on Monday, July 4, 2016 will be held Thursday, July 7, 2016 at 11:00 a.m. at Ruth Baptist Church. Burial will be in Pulaski-Bleckley Memorial Gardens. Major Belflower was born on August 2, 1938 in Cochran to Charles Lester and Ethie Pritchett Belflower. A veteran of The Vietnam Conflict, Major Belflower entered the Marine Corps in 1955 as enlisted and was commissioned in 1968 as an officer, retiring at the rank of Major in 1978 after 23 years of service. He then moved his family home, where he was a volunteer Cub Scout Troop leader and worked as a 4-H Program Assistant with the Bleckley County Extension Office from 1979 to 1981. He then worked from 1981 to 1988 at YKK as a supervisor in the plastic fasteners zipper plant in Macon. He also worked with Gilman Paper Company from 1989 to 1991. He was preceded in death by his siblings, Arlene B. Purser, Leland Belflower, Welch Belflower, Harris Belflower and Alvin Belflower. He is survived by his wife of 54 years, Brenda G. Smith Belflower of Cochran; sons, Derek (Ella Ruth) Belflower of Cochran, Shannon (Christy) Belflower of Byron, and Craig (Marsha) Belflower of McDonough; six grandchildren, Ridge (Meagan), Eli, Dane, Hayden, Lydia, and Ethan; one great-grandchild, Aidan; and two brothers, James (Doris) Belflower of Cochran and Jerry Alton (Elaine) Belflower of Valdosta. The family will be at the Belflower residence on Hudson Jones Road and will meet friends for an hour prior to the service. In lieu of flowers the family requests donations be made to Ruth Baptist Church, 216 Ruth Church Road, Cochran GA 31014 or Gentiva Hospice, 319 Margie Drive, Warner Robins, GA 31088. Fisher Funeral Home has charge of arrangements.

Funeral services for Major Herman Edward Belflower USMC, Ret, 77, who died in his hometown of Cochran on Monday, July 4, 2016 will be held Thursday, July 7, 2016 at 11:00 a.m. at Ruth Baptist Church. Burial will be in Pulaski-Bleckley Memorial... View Obituary & Service Information

The family of Herman Belflower created this Life Tributes page to make it easy to share your memories.

Send flowers to the Belflower family.