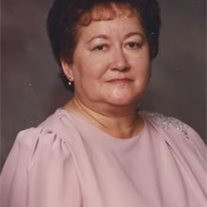 Graveside services for Janice Howell Lamb, 78, of Danville, who died peacefully Wednesday, March 9, 2016, in Fairview Park Hospital in Dublin, will be held on Saturday, March 12, 2016 at 11 a.m. in Cool Springs Primitive Baptist Church Cemetery with Elders Franklin Bryant and Sammy Bryant officiating. Born December 26, 1937, in Danville, Bleckley County, she was daughter of the late Nathan Howell and Reaunette Collins Howell. She was a perfect wife, mother and homemaker. She was employed at Robins Air Force Base as a secretary, before retiring to raise her two sons. She returned to RAFB for several more years, was an excellent cook, taught by her mother and mother-in-law. She was of the Primitive Baptist faith. Her memory will be forever treasured by her husband of 59 years, James Ray Lamb, Sr. of Danville; sons, James (LuJean) Lamb, Jr. of Macon and Kerry Lamb of Danville; grandsons, Landon Lamb of Valdosta and Logan Lamb of Macon; new little kitty, Nite-Nite; mother-in-law, Julia Lamb of Danville; sister, Karene Darsey of Danville; brothers, Kenneth Howell, Kerby (Linda) Howell of Danville and Jeremiah (Gloria) Howell of Cochran. In lieu of flowers, memorials may be made to the Cool Springs Primitive Baptist Church Cemetery Fund. Fisher Funeral Home of Cochran has charge of arrangements.

The family of Janice Howell Lamb created this Life Tributes page to make it easy to share your memories.

Graveside services for Janice Howell Lamb, 78, of Danville, who...

Send flowers to the Lamb family.