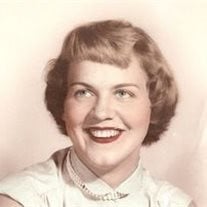 April 14, 2015, 81 years of age. Jean was born Margaret Jean Ellis in Eufaula, Alabama to William Van Ellis and Margaret Mae Gibbons Ellis on December 18, 1933. Two brothers, William Van Ellis II, James Edward Ellis, and several other family members, have preceded her in death. Jean graduated from Cochran High School, Cochran, Georgia in 1952. She grew up in and was an active member of The First United Methodist Church, Cochran, Georgia, where she married James Sanford Rosser of Miami, Florida in November 1952. She remained married to him until 1974. Of that marriage, Jean bore three children, all surviving: James William (Laurel) Rosser of Acworth, Georgia; Robert Ellis Rosser of Miami, Florida; Carolyn Rosser (Walter) Dunklin of Granger, Indiana. In 1979 Jean married Manuel F. DePena in Miami, Florida, remaining married to him until his passing in 2007. Jean was step-mother to his two children, both surviving: Roger DePena of Miami, Florida; Vilma (Robert) DePena Waikay, of Miami, Florida. Jean is also survived by four grandchildren; Katie, Van, Sarah, and Carolina, and one great-grandson, Nathan. At the time of her passing, Jean was eagerly awaiting the birth of her second great-grandson, Benjamin, in May. Jean spent most of her adult life as a homemaker. She worked part-time as a model with a clothier in Miami, Florida and later earned her Florida Real Estate Salesperson license. She was employed by The Lennar Corporation before accepting a position with Miami-Dade Community College working with veterans in the Upward Bound program. Jean had a unique sense of humor, a constant smile, and a gentle spirit that will be missed. Even after a severe decline in her health, Jean could always manage a warm greeting for her caregivers and family members. She was a loving and devoted daughter, sister, wife, mother, and grandmother. During her lifetime she endured events which strengthened her character and reinforced her faith. As a young wife and mother, Jean learned how to waterski and became a very accomplished athlete. Although pale pink was her favorite color, Jean always wore red lipstick and never left home without being impeccably dressed and groomed. She was an animal lover and rescued many strays. Per her request, no services will be conducted in Indiana. A private graveside service, officiated by a representative from The First United Methodist Church of Cochran, Georgia, will occur at Cedar Hill Cemetery in Cochran, Georgia where she will be laid to rest beside her parents and her brother, James. On Monday, May 4, 2015 at 8:30 a.m., a Roman Catholic Mass will be said in her honor at St. Louis Catholic Church, Pinecrest, Florida, of which she was a member until the time of her passing. In lieu of flowers, Jean has requested donations be made to Fisher House Foundation, providing housing and transportation services to assist the families of wounded American service members. John 14:1-4 Let not your heart be troubled: ye believe in God, believe also in me. In my Father's house are many mansions: if it were not so, I would have told you. I go to prepare a place for you. And if I go and prepare a place for you, I will come again, and receive you unto myself; that where I am, there ye may be also. And whither I go ye know, and the way ye know.

The family of Jean Ellis Depena created this Life Tributes page to make it easy to share your memories.

Send flowers to the Depena family.