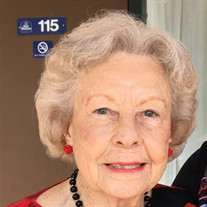 Funeral services for Mrs. Jewell L. NeSmith who passed away Sunday, January 30, 2022, in Asheville N.C. will be held Saturday, Feb. 5, 2022, at 2:00 P.M. in the Chapel of Fisher Funeral Home. Burial will be private in Cedar Hill Cemetery. The family will greet friends following the services in the Chapel. The Newspaper Lady Jewell NeSmith was known as the “Newspaper Lady” for many years around Cochran. She took pride in getting the stories from the source and making sure the facts were correct. She stayed up many Tuesday nights with her staff (and her daughter asleep under the layout tables) making sure everything was perfect before the weekly paper was printed on Wednesday. She loved creating a story. Instead of an obituary, this is the story of “The Newspaper Lady”. On May 8, 1926, a unique soul was born in Cochran, Georgia. She grew up on a small farm with six brothers and sisters. She was not the first born, but her opinionated and strong-willed personality often led her to be the “bossy” one to her older sister, Evelyn and her younger brothers, Carlton, Jordan and Russell. While they preceded Jewell in death, her younger sisters Lillian and Alma remained close to Jewell. After graduating from Cochran High School in 1944, the small-town girl had a dream to attend a four-year college near Atlanta. Her financial situation at the time prevented her from leaving Cochran but she found work at a store in town while attending Middle Georgia College. She was drawn to sports at an early age and dribbled her way on to the women’s basketball team at the college. She enjoyed sharing stories and photos of playing on half court back in the day. She met a hometown fella, Gerald NeSmith, who she married November 20, 1948. They enjoyed fishing. Despite his side of the story, she always maintained bragging rights of the largest fish. Apparently all the surviving photographic evidence of the time supports her version of events. After 17 years of marriage, they had one daughter, Donna, in 1964. Jewell loved to write and tell stories, so when the opportunity came that she could buy The Cochran Journal, she did in 1966. Her motto printed on the front page of each paper was, “The Written Word is More Than Heard”. Over the past several years she lamented the loss of printed newspapers. Her true passion was writing, interviewing, editing, and printing the weekly newspaper. For the time, it was unheard of that a woman would be a reporter, much less own a publishing company and weekly newspaper. She was honored to be accepted as one of the first women in the Georgia Press and National Press Associations. She received numerous awards during the years she owned the paper until the time she retired in 1986. She was a petite, boisterous, engaging, feisty, charming, independent and intelligent lady. She enjoyed meeting and chatting with new people, especially to learn about them. She was a consummate storyteller, weaving layers of connection between the stories of those she met with her own story. She loved women’s basketball, Braves baseball and Georgia football. For nearly forty years, she and Donna had season tickets to Georgia football. This past season at 95, she was still found in Athens on Saturdays for several games. She was determined to cheer on her Dawgs and she could yell, “Go Dawgs” louder than anyone. At first it was disconcerting that she had to accept a Florida Gator son-in-law [Ash Ahsanuddin], but she took it in stride and dutifully cajoled him every chance she had. She enjoyed the addition of a free spirited but driven grand-daughter [Ayesha Jade Ahsanuddin] and shared their love of writing. Jewell was a spiritual person, who loved sharing her Christian faith. She spent time daily reading her Bible and devotionals. She was a member of The First Baptist Church in Cochran. Some of her fondest memories included working with Sunday School, the WMU and Summer camps at Ridgecrest. She lived with God leading her life every day and in every way. In recent years the Newspaper Lady’s voice had become quieter, her eyes could not see as well to read her beloved newspaper and her hands could not write the stories she would have loved to share. She could not get out to see her friends and neighbors with the pandemic, so she relied on the phone to communicate. Donna set up a Facebook page for her and she became quite adept at remarking on photos, reading the headlines and listening to The First Baptist Church services. On Sunday, January 30th, the Angels arrived to fly her home, and that day’s Heaven’s Daily News headline read; “Fabulous New Editor to take the Reins”. The next chapter of The Newspaper Lady’s story continues. ( I love you Mama, and I am so very proud to be your daughter.) In lieu of flowers the family requests that donations be made to Cochran First Baptist Church.

Funeral services for Mrs. Jewell L. NeSmith who passed away Sunday, January 30, 2022, in Asheville N.C. will be held Saturday, Feb. 5, 2022, at 2:00 P.M. in the Chapel of Fisher Funeral Home. Burial will be private in Cedar Hill Cemetery. The... View Obituary & Service Information

The family of Jewell Lawson NeSmith created this Life Tributes page to make it easy to share your memories.

Send flowers to the NeSmith family.