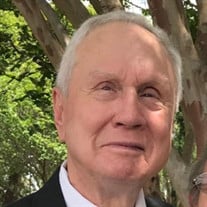 Jimmy Jackson Holder, 85, of Dothan, passed away on November 24, 2021, at home surrounded by loved ones after a long battle with dementia. A memorial service will be held at Fisher Funeral Home in Cochran, Georgia on Sunday, November 28, 2021, at 2:00 p.m. with Reverend Dr. Bill Woodson officiating. Visitation with the family will follow the service. Jackie was born on April 26, 1936, to the late Ernest and Ruby Bass Holder in Dodge County but lived most of his life in Cochran, Georgia, before moving to Dothan, Alabama in 2016. He attended Cochran High School where he excelled in baseball and football and met the love of his life, Anne Wimberly. Jackie joined the Air Force and was stationed in Oxnard, California. Finding the separation too hard to bear, Anne’s parents drove her to meet Jackie in Yuma, Arizona, and they were married on August 9, 1956. After completing four years in the Air Force, they returned to Cochran to raise their family. Jackie was the sole county commissioner of Bleckley County for 22 years during which time he helped make many improvements to the community. A highlight of his political career was defending Bleckley County’s right to maintain a single commissioner form of governance. This argument known as Holder vs. Hall was presented before the Supreme Court of the United States in 1994 with Holder prevailing. His many accomplishments and service to Bleckley County were honored when the Georgia Highway 87 Bypass in Cochran was named the “Jackie Holder Bypass” in 2019. He was also a very active member of the Longstreet United Methodist Church and served the community with various volunteer organizations. One of his favorite roles was as little league baseball coach where he helped to mentor many young men in the community. Jackie enjoyed fishing, gardening, and spending time with his grandchildren who loved learning the joys of country life from the man they adored. Jackie will be remembered by those that knew him best as someone who loved people and always looked for ways to brighten their day and make them smile. He was preceded in death by his parents and his devoted wife Anne Wimberly Holder. Survivors include his three daughters, Debra Holder of Dothan, Susan (Brad) Wilson of Cordele, and Jenny (Judd) Williams of Dothan; four grandchildren, David Adams, Kendall Wilson, Olivia (Brendan) Williams McGallagher, Meredith Williams and one great-grandson, Knox McGallagher. He is also survived by his two brothers, Bill Holder of Macon and Terry (Brenda) Holder of Lincolnton as well as many special family members and friends. In lieu of flowers please consider donating to the Longstreet United Methodist Church, P.O. Box 442, Cochran, GA 31014, the Respite Care Ministry of FUMC of Dothan, 1380 West Main Street, Dothan, AL 36301, or a charity of your choice.

Jimmy Jackson Holder, 85, of Dothan, passed away on November 24, 2021, at home surrounded by loved ones after a long battle with dementia. A memorial service will be held at Fisher Funeral Home in Cochran, Georgia on Sunday, November 28,... View Obituary & Service Information

The family of Mr. Jimmy Jackson Holder created this Life Tributes page to make it easy to share your memories.

Jimmy Jackson Holder, 85, of Dothan, passed away on November...

Send flowers to the Holder family.