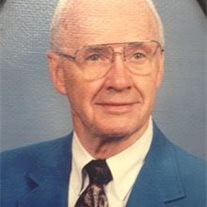 Funeral services for Joe Denson Lyles, Jr., of Cochran, 95, who died Monday, December 28, 2015, in Taylor Regional Hospital, will be held Friday, January 1, 2016 at 2:00 p.m. at Cochran First United Methodist Church. Burial will be private in Cedar Hill Cemetery. Born in Bleckley County, Joe was the son of the late Joe D. Lyles, Sr. and Emma Higginbothan Lyles and was the widower of Anne Trunnell Lyles to whom he was married for 55 years. He was a member of the 1939 graduating class of Cochran High School and attended Middle Georgia College. He was a 1st Lieutenant of the United States Army Air Corps where he flew 29 missions in a B17 during World War II. He was the owner and operator of Lyles Store. He was a member of the First United Methodist Church where he had served as member of the Administrative Board and Chairman of the Trustees. He was active in the Cochran Masonic Lodge F&AM #217, a Shriner, and a member of the Cochran-Bleckley Jaycees. He was preceded in death by a brother, Louis Lyles, sister, Louise Lyles Smith, and daughter-in law, Dianne Lyles. Survivors include 2 daughters, Donna (Wally) Hallowes of Apopka, FL, and Deborah Anne Lyles of Augusta, GA; son, Jody Lyles of Cochran; grandchildren, Lisa (Jim) Fredericks of New Albany, OH, Wally (Shannon) Hallowes of Cumming, Jay (Kanti) Lyles of Austin, TX, Brett (Angie) Lyles of Athens, and Leigh Anne (Tommy) Fisher of Cochran; 8 Great-Grandchildren; and a sister, Lilla Lee Purser of Cochran. Family will be at the home of Mr. & Mrs. Joe Fisher, 2nd Street in Cochran, and will meet friends following the service. In lieu of flowers, please make donations to First United Methodist Church of Cochran, P.O. Box 87, Cochran, GA 31014. Fisher Funeral Home of Cochran has charge of arrangements. www.fishersfuneralhome.net

The family of Joe D. Lyles, Jr. created this Life Tributes page to make it easy to share your memories.

Send flowers to the Lyles, family.