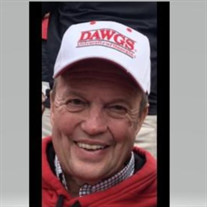 Cochran – Leo Lamar Phillips, Jr., age 78, passed away peacefully Sunday, November 28, 2021, at his home surrounded by his family. Funeral services will be held Wednesday, December 1, 2021, at 2:00 P.M. in the Cochran First Baptist Church. Burial will be private in Cedar Hill Cemetery. A visitation will be held Tuesday, November 30, 2021, from 6:00 P.M. to 8:00 P.M. at Fisher Funeral Home. Mr. Phillips, born in Macon, Georgia, was the son of the late Leo Lamar Phillips, Sr. and Anne Newton Phillips. He was preceded in death by a son. Leo attended Cochran City Schools and was a member of the Cochran High School Class of 1961. After graduation he continued his education at Middle Georgia College where he earned his associate degree before going to the University of Georgia. While at Georgia he earned his Bachelor of Business Administration in 1965, Master of Business Administration in 1967, and went on to complete his Juris Doctorate of Law in 1970. Following graduation and passing the Georgia State Bar, Leo returned to Cochran and began practicing law. He continued to practice law in many capacities until his death. He was the co-owner of the Cochran Oil Mill and Ginnery, which was founded in 1904, partner in the law firm of Phillips and Phillips, director on the Central Georgia Banking Company Board of Directors, director on CNI Ag Board of Directors and the executive board of directors for the Chem-Nut Company. He served as the City of Cochran’s attorney until his death. Leo was a member of Cochran Masonic Lodge #217, Rotary International and a member of Cochran First Baptist Church. He was a diehard Georgia Bulldog Fan and enjoyed playing sports and exercising. Of all things Leo accomplished and enjoyed, he loved his family and friends most of all. Left to cherish his memories are his wife of 42 years, Randi McPhaul Phillips of Cochran; his children, Lynn Phillips Davis of Monument, CO, Leo Phillips III of Denver, CO and Sydney Phillips of Atlanta; his grandchildren, Rebecca Angelo and Lilly Davis of Colorado; his brother, John R. Phillips and his wife Grace of Cochran; his nieces, JoAnne Ard, Marcie Cochran and Kathryn Collier; his loyal walking partner, Sam. If you would like to make a contribution in lieu of flowers the family requests that donations be made to either First Baptist Church of Cochran, 101 S Second Street Cochran, GA 31014 or Bleckley County Cross Country & Track Teams, C/O Shelley Cranford 1 Royal Drive Cochran, GA 31014. The family is at the Phillips residence on Third Street, Cochran.

The family of Mr. Leo Lamar Phillips Jr. created this Life Tributes page to make it easy to share your memories.

Send flowers to the Phillips family.