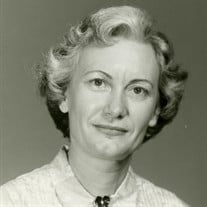 Funeral services for Mrs. Mary L. Forehand 103, of Cochran, who died Friday, January 4, 2019 at Royal Care in Cochran, will be held Monday, January 7, 2019 at 2:00 PM at Cochran United Methodist Church with Dr. Bill Woodson officiating. The family will visit friends and family following the service in the church. Burial will be private in Cedar Hill Cemetery. Mary Lancaster Forehand, was born November 2, 1915 in Pulaski County the daughter of the late Omar J. Lancaster and Hattie M. Lancaster both of Cochran. She was preceded in death by her husband, Jack Forehand and two brothers - Omar J. Lancaster, Jr. and Philip T. Lancaster. She is survived by a son- Jack J. (Jane) Forehand of Durham, NC, two grandchildren- Joseph Phillip (Anne) Forehand of Parker, Colorado and Mary F. (Rob) Douglass of Chapel Hill, NC and three great-grandchildren. Mary graduated as Valedictorian of Cochran High School in 1934 then attended Middle Georgia College. She graduated from Georgia State College for Women in 1938 and later received her M.Ed. from George Peabody College, Nashville, TN in 1950. 'Miss Mary' was a passionate lifelong educator. Her teaching career began in 1938 in Gay, Georgia, then Richland, Georgia, where she was also school principal during the war years. After returning to Cochran in 1945, she taught high school history, english, grammar and literature. She had the distinction of being the first STAR teacher for Cochran High in 1959. Mary later taught grammar and literature at Middle Georgia College until her retirement in 1972. She was honored by having a school annual dedicated to her on three occasions. Even after retirement, she continued educating by teaching Sunday school, organizing children’s music activities at her church, and reading stories to the residents at Royal Care Retirement Center. Mary was an active member of the Cochran First United Methodist Church serving in many leadership capacities. She also sang in the choir and played piano and organ. Her civic activities included the Cochran Woman’s Club, the Garden Club and the United Methodist Women. She was a member of the Delta Kappa Gamma honor society of women educators and a member of the Hawkinsville Chapter of the D.A.R. for over 50 years. Music, art, flowers and all of nature gave her pleasure. Flowers are accepted and/or memorials may be made to Cochran First United Methodist Church, PO Box 87, Cochran, GA 31014. The Family is at the Forehand residence on Kathy Drive in Cochran.

The family of Mrs. Mary L. Forehand created this Life Tributes page to make it easy to share your memories.

Send flowers to the Forehand family.