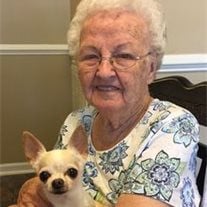 Funeral services for Mary "Naomi" Kerr Brown, 93, of Cochran, who passed away peacefully at her daughter's home on Tuesday, November 7, 2017, will be held on Friday, November 10, 2017, at 11 a.m. in Cochran First Baptist Church with Rev. Keith Rustin, Rev. Ken Brooks and Dr. Reed Crumbliss officiating. Burial will follow in the O'Neal-Brown Family Cemetery at 4 p.m. Friday on the farm where Naomi was born and raised in Greene County, Greensboro, GA. Naomi was the daughter of the late Joel Davidson and Mamie Gray Kerr. She graduated from Greene County High School in May, 1941. In July of that year, she married the love of her life, John Marshall Brown. Their marriage lasted 60 years until his death on August 11, 2001. John and Naomi moved to Cochran in 1948, where she became a seamstress at L&H Shirt Factory, where she worked for 30 years. She was also a devoted homemaker. Both joined and became active members of Cochran First Baptist Church in August, 1948. She has been a faithful member there throughout these many years. Early on, she taught Sunday School in the childrens' department. Naomi had a real heart for missions and was active in the Women's Missionary Union, having served as the WMU Director for several years. She was a Charter Member of the Lydia Sunday School Class, organized in 1983 (now the Dorcas-Lydia Class). Naomi enjoyed being an active member of the First Baptist Saints Alive Group and the Pulaski-Bleckley Baptist Association's Singing Seniors Choir. She served as a mission volunteer with Builders for Christ and with Bold Mission Builders in several states, which included: Hawaii, Kentucky, Mississippi and Georgia. Naomi enjoyed reading, especially her Bible. She read the Bible through at least five times. She loved working in her yard and in her flower beds. Every spring, people always admired the beautiful daffodils and irises blooming in her yard. On her 80th and 82nd birthdays, she went sky diving. Throughout the years, Naomi loved and spoiled her cats, especially Blackie and Sunny. She was devoted to her beloved dog, Button. Besides her parents and her husband, John, Naomi was preceded in death by her three brothers, Joel D. (Jake) Kerr, James Kerr and Bob Kerr, and her sister, Francis K. Stephens Smith. Survivors include: sons, Joel M. (Bernice) Brown of Covington and Jamie M. (Kathy) Brown of Cochran; daughter, Joyce Brown of Cochran; five grandchildren, Lee (Jennifer) Brown, Marshall (Sherri) Brown, Kathie (Walter) Rabon, Kristen (Eric) Reeves and Jenna (Matthew Mosely) Brown; 12 great-grandchildren. Naomi is also survived by her other daughter, Tina Powell, and her other son, Danny Grantham, both of Cochran. The family members would like to thank the staff at Royal Care Assisted Living for the love and care they gave their mother during the 4-plus years she was there. The family would also like to say a special thanks to Serenity Hospice of Warner Robins for their love and care as well. The family will be at Pine Hill Drive in Cochran, and will meet friends Thursday from 6-8 p.m. at the funeral home. While flowers are appreciated, donations may be made to The First Baptist Church Missions Program. Fisher Funeral Home has charge of arrangements. www.fishersfuneralhome.net.

Funeral services for Mary "Naomi" Kerr Brown, 93, of Cochran, who passed away peacefully at her daughter's home on Tuesday, November 7, 2017, will be held on Friday, November 10, 2017, at 11 a.m. in Cochran First Baptist Church with Rev. Keith... View Obituary & Service Information

The family of Mary Naomi Kerr Brown created this Life Tributes page to make it easy to share your memories.