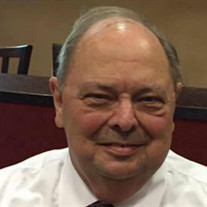 Funeral services for William Lonnie Barlow, 77, of Cochran, who died on Tuesday, July 30, 2019, will be held on Friday, August 2, 2019 at 3 p.m. in the Cochran First United Methodist Church with Dr. Bill Woodson, Dr. Felix Haynes and the Rev. Joy Fisher officiating. Burial will be in the Berryhill Family lot in Cedar Hill Cemetery. Mr. Barlow was an attorney at law and a Baptist. He was the author of “Bleckley County,” published in 2010 and was the official Historian of Cochran and Bleckley County by Proclamation dated August of 2004 by the Mayor of Cochran and the Sole Commissioner of Bleckley County. Born on Sunday, May 31, 1942 on Violet Street in Cochran, Bleckley County, Ga., his parents were Nolan Henry Barlow and Mary Frances Berryhill Barlow. He was named for his grandfather, William Lonnie Berryhill. Lonnie grew up in downtown Cochran and started school in the fall of 1948 next door to the Cochran City Auditorium. His family, including sisters, Nola Jean Barlow Hardy and Mary Anne Barlow, were all members of the First Baptist Church of Cochran. It was there that Lonnie made a profession of faith during an April revival and was baptized on April 27, 1953. He graduated from Cochran High School on May 31, 1960 with honors. He graduated from Tulane University on June 1, 1964 and from the Walter F. George School of Law of Mercer University on June 4, 1967. Lonnie served four years during the Vietnam Era in the United States Navy and was awarded the National Defense Service Medal, Good Conduct Medal and Navy Achievement Medal. He passed the State Bar of Georgia exam and was admitted to the practice of law on May 10, 1971. He served three two-year terms as a City Alderman on the Cochran City Council and was Mayor Pro-tempore in 1979 and 1985. Lonnie was engaged in the general practice of law in Cochran for 45 years. The highlight of his legal career was an appearance before the Supreme Court of the United States on October 4, 1993, in the case of Hall v. Holder, which sought to contest the single county commissioner form of government in Bleckley County. In a 5-4 decision handed down on June 30, 1994, the highest court in the land upheld the single county commissioner form of government in Bleckley County, thus preserving our local form of government since creation of the county in 1912. Lonnie and Bertha married in the sanctuary of First Baptist Church in Cochran on February 18, 1995. They were active in the Oneness Sunday School Class, which Lonnie taught for 17 years. He played the piano at prayer meetings for 35 years and served briefly as church organist. The church was always a guiding star for both of their lives. Lonnie was ordained on October 15, 1975 and served seven terms on the church Board of Deacons. He was clerk of the church for many years, and he served on the committees 1975-76 when the Dykes Street Building was built and 1991-99 when the East Annex and Fellowship Hall were built. Together, Lonnie and Bertha enjoyed flowers and gardening. Their hobbies included reading, music and piano. Lonnie enjoyed local history and writing. Over the years, they have been caregivers for their parents, relatives and close friends whose memories are cherished. He is survived by his wife of 24 years, Bertha Barlow of Cochran; two sisters, Nola Jean (Jack) Hardy of Bluffton, S.C. and Mary Anne Barlow of Decatur; three nephews, Jack (Libby) Hardy of Bluffton, S.C., Jeff (Sharon) Hardy of Raytown, MO and Joel (Carole) Hardy of LaGrande, OR; three stepchildren, Curtis M. (Dr. Paula H.) Bryant of Cochran, Linda B. (Zane) Dykes of Bonaire and Kristi B. (Michael) Corrigan of Macon; five grandchildren, Jack Corrigan, Alyssa Grace Corrigan, Colby M. (Bailey) Bryant, Mallory Dykes (J.T.) Holton, and Maci Dykes ; and two great-grandsons, Bo Bryant and Sam Bryant. The family will be at the residence on Paula Drive, Cochran, and will receive friends Thursday night from 6-8 at the funeral home. In lieu of flowers, make donations to Nolan Frances Barlow Scholarship, In Memory of William Lonnie Barlow, MGA Foundation, 100 University Parkway, Macon, GA 31206, or First Baptist Church St. Simons, 729 Ocean Blvd., St. Simons, GA 31522. Fisher Funeral Home is in charge of arrangements.

Funeral services for William Lonnie Barlow, 77, of Cochran, who died on Tuesday, July 30, 2019, will be held on Friday, August 2, 2019 at 3 p.m. in the Cochran First United Methodist Church with Dr. Bill Woodson, Dr. Felix Haynes and the Rev.... View Obituary & Service Information

The family of Mr. William Lonnie Barlow created this Life Tributes page to make it easy to share your memories.

Funeral services for William Lonnie Barlow, 77, of Cochran, who...

Send flowers to the Barlow family.