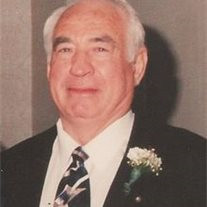 William Carlton Lawson, age 86 of Cochran, Georgia passed away May 16, 2016 at St. Joseph's Hospital in Atlanta following an extended bout of pneumonia. He was the son of Violet and Zollie Lawson of Cochran, Ga. Carlton is survived by his wife, Antoinette Lawson of Cochran, and the children from his first marriage to Lavada S. Lawson - Eliot Lawson of Cochran and Mary Ellen L. Barker of Atlanta. He has four surviving sisters - Jewell Nesmith of Cochran, Lillian Kelly of Oglethorpe, Alma Lewis of Macon, and Evelyn Cook of Macon. Carlton has two deceased brothers, Russell Lawson and Jordan Lawson, both of Cochran. He also has one grandchild, Evan Barker, of Atlanta. Carlton was a 1950 graduate of Abraham Baldwin Agricultural College and a 1952 graduate of the University of Georgia where he received his Bachelor of Science Degree in Agriculture. Carlton had been an active business man until his recent illness. He was best known in his community for business and economic development. He served as President of the Cochran Rotary Club and honored for his service to the Cochran-Bleckley Development Corporation and Chamber of Commerce. Carlton was awarded Man of the Year by the Georgia Association of County Commissioners in 1970. Carlton was also a proud veteran having served as a medic in the US Army during the Korean conflict. He is best remembered in the community for his meritorious service to the 4-H program in Bleckley County. He served as a county extension agent to Bleckley County for 17 years. During the 1970's, he conducted weekly radio programs for the county and wrote weekly agricultural columns for the newspaper. He was honored for his work in agriculture by the University of Georgia's extension program, Georgia County Agents Association, and numerous local organizations. Carlton made a positive impact in many young people's lives through his work in 4-H and teaching in the Cochran school system during the 1960's and 70's. After retiring from the University of Georgia extension service, Carlton went into private business and had an extensive career in the warehouse, farming, and cotton merchandising. His love for agriculture was evident from an early age. He always had a tenacious entrepreneurial spirit. His sisters remember him as a young boy selling boiled peanuts grown on the family farm. Carlton will be remembered for bringing one of the first apple orchards to the Middle Georgia area during the 1970's and 80's. One of the favorite family memories was Carlton's fish fries for family and friends. Carlton's kind spirit will live forever in our hearts. Mr. Lawson felt strongly about his faith in Christ. If there was one thing he would want his family and friends to remember, it was his strong faith in Christ. It was his hope for everyone he knew to have a personal relationship with the Lord. Funeral services for Mr. Lawson will be held, Friday, May 20th 11 AM at the First Baptist Church in Cochran, where his family are longtime members. Visitation with the family will be held on Thursday 6-8 PM at Fisher Funeral Home in Cochran. Carlton will be buried at the Cedar Hill Cemetery in Cochran, Georgia.

William Carlton Lawson, age 86 of Cochran, Georgia passed away May 16, 2016 at St. Joseph's Hospital in Atlanta following an extended bout of pneumonia. He was the son of Violet and Zollie Lawson of Cochran, Ga. Carlton is survived by his wife,... View Obituary & Service Information

The family of William Carlton Lawson created this Life Tributes page to make it easy to share your memories.

Send flowers to the Lawson family.